About 3 1/2 years ago, the Sisterhood completed a project to create new Torah mantles.  At the same time, we cleaned out one of the back rooms in which we had stored a number of old Torah mantels.  Judy Joseph took some of them, along with an unused Parokhet (curtain) for the Ark, and made a set of wall hangings for the Sanctuary wall.  We offered the rest to donate to congregations in need.  Most of them, however, were unclaimed.  We were on the verge of discarding them by burying them in our cemetery, when I found an artist in Jerusalem, Jo Milgrom, who turns discarded objects (often of Judaica) into Midrash art.   Her pieces are sometimes whimsical, sometimes serious, sometimes poignant, and always thoughtful.  You can see her catalog on her web site, jomilgrom.com.

Jo sent me pictures and brief comments about five pieces that she created from our Torah mantles.  As we approach the holiday of Shavuot, celebrated May 18-20, we might consider what these pieces say to us about Torah.

Found and Lost and Found Again

The first piece, entitled Found and Lost and Found Again, is made of Torah mantles and a Torah reading table cover on a luggage carrier.  The Jew in the Diaspora maintains his or her identity despite wandering and exile and the ultra-mobile society in which we currently live by carrying around small symbols of Torah.  A mezuzah; a seder plate; a hanukkiah; a tallit; tefillin; a siddur or humash.  What have you carried with you during your lifetime, from one home to the next, that roots you in Torah? 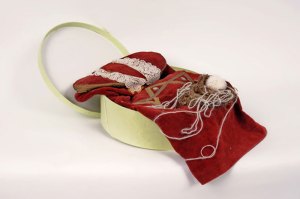 The second piece, Your Mother’s Torah, depicts the Torah mantle with a nest inside, but is also reminiscent of a sewing kit.  Jo describes it as a mother with a fruitful nest.  We might consider using the teachings, mitzvot, stories, and wisdom of Torah to stitch together a Jewish practice and a Jewish home that is comforting and nurturing.  That home – not the synagogue! – is the primary means by which we transmit the values of Torah to the next generation. 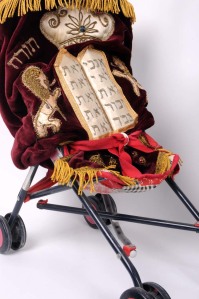 Out of the Mouths of Babes

The third piece is a Torah mounted on a baby stroller – Out of the Mouths of Babes.  Like the children in the hagaddah, we teach Torah through engaging with questions.  No question is out of bounds – and sometimes the most innocent questions are the most challenging and searching. 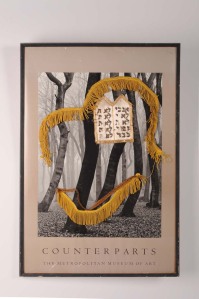 The fourth piece is a poster from the Metropolitan Museum with part of a Torah Mantle mounted on  it.  Entitled Counterparts, Jo writes that “the figural trees in the poster invited the association with Torah as Tree of Life.” 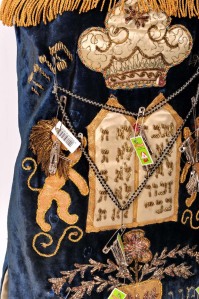 Finally, the last piece is entitled Safety in Torah — what could be safer than safety pins!  It reminds me of the joke — “What do you call a Torah with a seat belt?   A Safer Torah!”  The pun requires a little knowledge of Hebrew (the word sefer, meaning book or scroll).  The piece also alludes to the notion associated with the mezuzah, representing a mini Torah scroll, that the name of God written on the Mezuzah container (Shaddai, the Almighty) stands for the phrase shomer d’latot Yisrael, guardian of the doors of Israel.  While I do not believe that either the Torah or the Mezuzah function in any way as protective amulets, there is clear evidence that people who are active in religious communities live happier and healthier lives.

The experience of viewing art is very personal and subjective – the brief comments I have written above are my impressions.  Please feel free to share your own comments and impressions.